Little old me is one of the featured authors in the January 2014 issue of net magazine. I explain how to use Adobe Kuler and Illustrator to create harmonious web graphics that scale crisply to any screen size.

Go buy a copy from your local newsagent and flip to Page 90. It’s that easy. 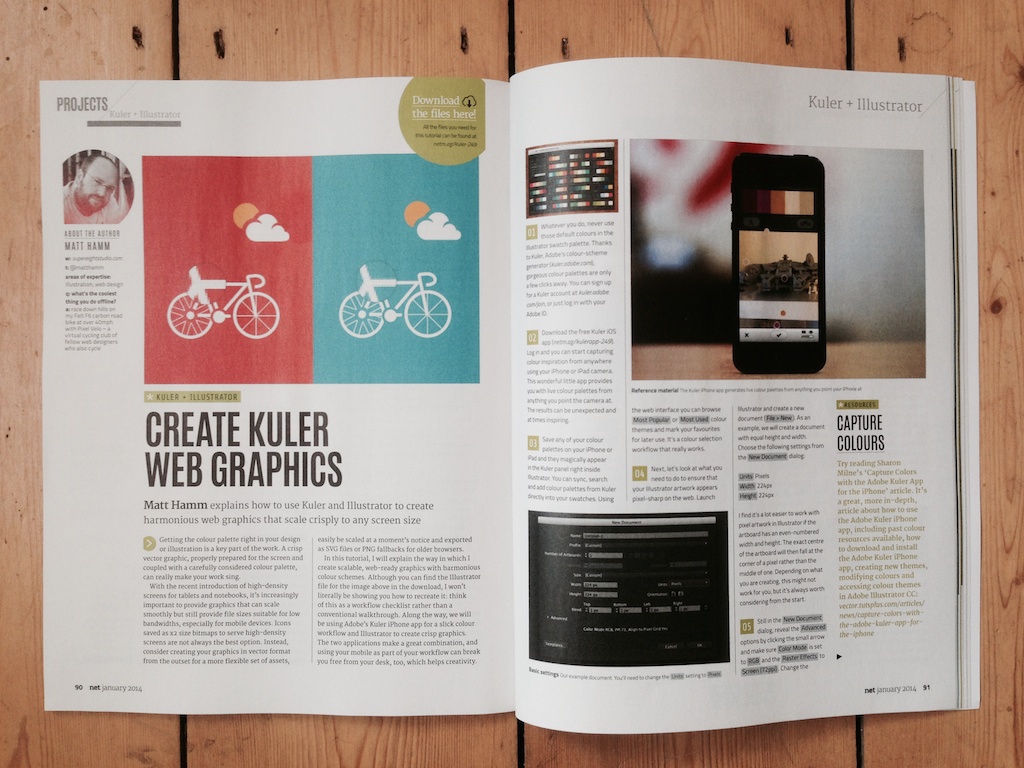 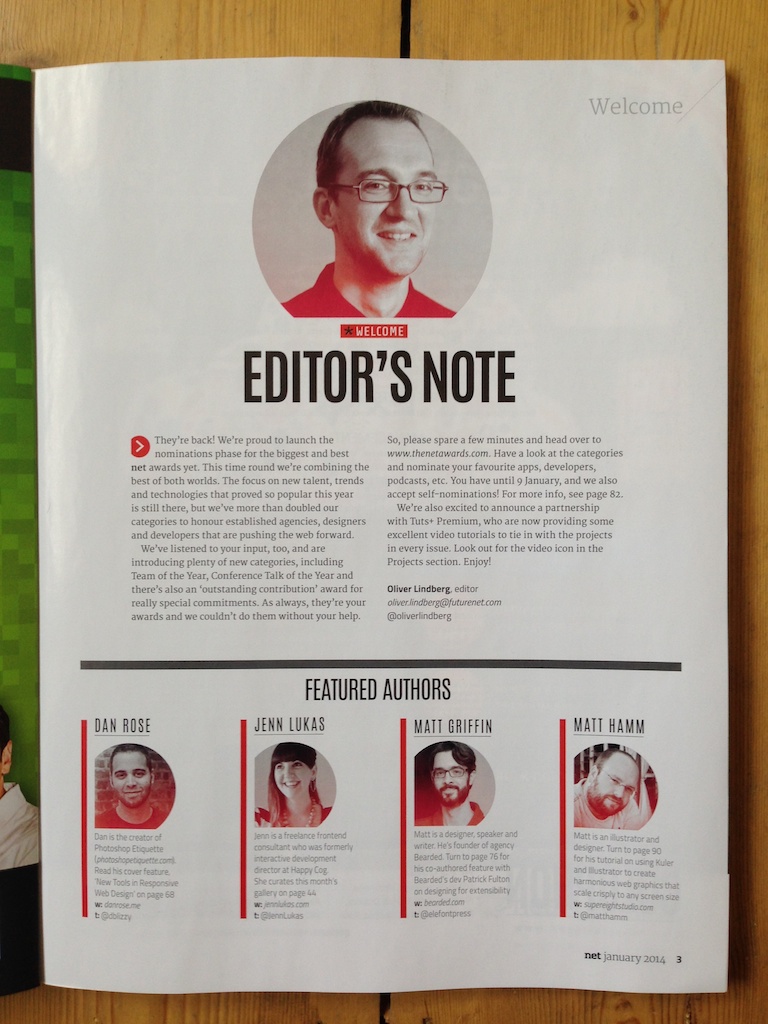 If you have any feedback or discussion around the article please @ me on the Twitters.

In mid-September I enjoyed a weeks holiday lounging around in Portugal. As ever, I was keen to get stuck into a book for the week and, following a recommendation from a friend, I decided to go with ‘Finding Ultra’ by Rich Roll. To summarise very roughly, it’s about Rich’s journey from being an alcoholic with a bad diet to successfully competing in Ultra Man triathlon races. Having decided to train for and take part in a few triathlons in 2013, I figured this would be an interesting and inspiring read and I wasn’t disappointed.

Rich Roll is ‘Plant Powered’, as he calls it, and his long training and racing efforts are fuelled by a vegan diet. I wasn’t particularly aware of this and as the book developed it started to focus a little more on how he’s changed his diet over the years and finally gives examples of what typical meal times look like. All supported with some interesting scientific research highlighting the health benefits of a ‘Plant Powered’ diet.

I have no interest in going vegan, not at the moment anyway, but I’m always keen to eat as healthily as possible and if it helps me with my triathlon training along the way then I’m  definitely interested. Roll doesn’t suggest trying to change too much too soon with your diet but simply trying some of his eating habits over a 30 day period to see if they work for you. You never know, some of it might just stick! And so, after returning from holiday near the end of September, I decided to give it a go in October and with the month drawing to a close I thought I’d share the changes I’ve tried and how they’ve made me feel.

Breakfast is all about putting natural ingredients into your blender and making a healthy shake. In the book, Roll says ‘Get used to the idea of having a salad for breakfast!’. I bought a new blender and went for the NUTRiBULLET. This bad boy makes light work of blitzing everything into a smooth shake, effectively pre-digesting it before drinking.

The more varied the ingredients the better and I’ve changed the mix every day but typically it includes a few of the following: Spinach, kale, pak choi, tomatoes, blueberries, strawberries, raspberries, kiwis, apples, bananas, pineapple, goji berries, oranges, almonds, walnuts, coconut, hemp seeds, hemp protein, pumpkins seeds, chia seed, Spirulina, acai and water. The output is green. Always green. Mainly due to the Spirulina (a marine algae) but I can assure you that it always tastes delicious!

Lunch times has meant two things. Firstly, spending an hour, normally on a Sunday evening, prepping food for the week. Secondly, using said food to make up a tasty lunchbox. Typically, this has included some combo of: brown rice, quinoa, lentils, various beans, sweet potato, peppers and various green veg. A dash of salt and pepper and maybe a little humous, guacamole or salsa and another delicious and healthy meal.

Evening meals have involved lots more veg and other ingredients similar to lunch but this is where I’ve departed from the vegan vibe and eaten the odd bit of fish and meat if I’ve fancied it. After a cold breakfast and lunch, dinner has to be hot and Squash and coconut curry has become a favourite!

What have I left out?

Switching to the above has obviously meant leaving things out or changing to a healthier alternative. I’ve largely left out bread and pasta but gone for gluten free options when I have had them and instead of white rice i’ve had brown or basmati. The only dairy I’ve had is the milk in my morning coffee. I decided to give up milky tea for the month but can’t go without a morning coffee. Not yet anyway. With cereal, I’ve gone for almond milk which is surprisingly good. I can’t recall having cheese or butter at all.

I’ve also cut as much processed crap as possible and stuck to ‘real’, natural food. No crisps, very few biscuits and very little chocolate. Instead, I’ve snacked on things like  fruit and organic nuts and the odd bit of gluten free fruit loaf with almond butter.

Finally, the biggie, i’ve pretty much had no meat! I really thought I’d struggle with this one and I can’t to claim to have cut it out completely. I’ve had fish maybe three or four times at home and the odd piece of chicken while under the influence*. I haven’t been super strict in general and if i’ve been out for dinner at the pub or a friends, for example, I’ve just eaten whatever I want. The only rule I’ve set myself is that if I’m at home and in control of what I eat then I stick to the plan if I can.

What have I felt?

As Rich Roll suggested I would in his book, I started to experience the benefits of this kind of diet almost immediately and have continued to feel really great throughout October.

I’ve felt alert all day. No more mini crashes after having bread for lunch and snacking on simple, processed sugars. This is particularly pertinent right now as we have some big deadlines looming over us at Supereight and I’ve really noticed a surge in my productivity and the quality of my work.

I’ve saved a lot of money. While there was a little outlay at the start of the month for some of the supplementary ingredients for morning shakes, I’ve generally just needed to top up on a few bits here and there and get most of it from the local Guildford market for half the price of the supermarket. I’m happy to support my local producers. Leaving out meat is obviously the big money saver.

I’ve recovered  much better between training session. Getting far more natural nutrients and vitamins from the morning shake has really boosted my recovery. I’ve lost a little weight. I don’t need to at all but it’s a natural symptom of a low fat diet. Healthy fats (the Omega’s) are hugely important and they’re always included in the morning shake and when cooking with oils.

There’s an interesting passage in Roll’s book where he talks about microbes, or bacteria, in the stomach and how they send messages to the brain to influence our cravings. The more you eat of something, the more your microbes crave it. I’ve noticed that after 29 days i’m now craving these new foods instead of what I was eating before. Crazy stuff.

Surprisingly, most of it has stuck. I’m going to continue with the morning shakes and the veggie style lunches and try to lay off the gluten and dairy as much possible. I will still eat meat and fish here and there and generally enjoy what I want whatever when I’m out and about.

I don’t feel inclined to go vegan or anything as drastic as that but I want to continue experiencing the benefits I’ve noticed this month. I can’t say I’m ‘Plant Powered’ for now. Maybe just ‘Plant Powered. Ish.’

* I haven’t given up booze. I’m a lightweight so can’t take a great deal anyway!

‘Talk me through it’

As a designer, it’s important that you’re able to share and articulate your visual design ideas with clients in an appropriate and meaningful way. It may not be a formal presentation or pitch, it could be sharing assets through Basecamp or a test URL and following up with a Skype call or additional notes. You should take this opportunity to ‘pitch’ your ideas with belief and conviction and talk confidently about what you’ve done and ensure it’s clear that you’ve made informed design decisions. When a client asks, be ready to answer the question ‘Talk me through it’.

If pitching or sharing your design ideas formally is part of your job or something you’re used to then story telling is a must and you may be more articulate than many, but a lot of designers work less formally with their clients, particularly freelancers. It’s so important to tell a story, say why you’ve made the decisions you have and enter thoughtful discussions about why your ideas look the way they do.

I’ve been through the initial design sharing process with clients many times and along the way I’ve developed an interesting little trick to inform my approach. In the early days I would often enter into discussion armed with a sense of ‘it just feels right’ but no discerning story to tell. That’s not to say my ideas were poorly judged, I just hadn’t ‘recorded’ my thought processes that informed my decisions. I was under prepared and couldn’t react to some of my clients’ questions.